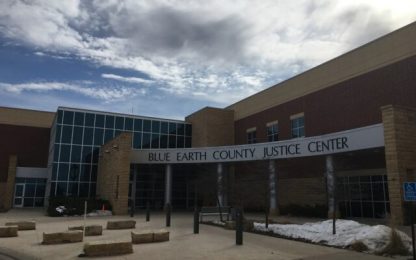 Two Blue Earth County Sheriff’s deputies were allegedly hit by a taser as they struggled to arrest a Mankato man who had threatened a family member with a crossbow. Samuel Richard Deegan, 26, was identified as the man deputies arrested after the incident.

A family member told police Deegan had had days to vacate a camper but was refusing to pack. When the family member confronted Deegan, he said: “If you want to get physical, I’ll shoot you with my crossbow.”

According to a criminal complaint, police were called to a home in Rapidan for a domestic assault report when Deegan approached one of the deputies with a crossbow. Deegan put the bow down when ordered, but was tased when he ran towards a group of bystanders. Deegan was ordered to stay on the ground, but he began running away and was tased a second time. When another deputy arrived on the scene, both officers attempted to get control of Deegan, but he resisted. As he continued to struggle with police, he was tased a third time.

Deegan continued to fight with the deputies and became entangled in the taser wires. He allegedly grabbed hold of one of a taser and activated it, sending a charge up one deputy’s arm to his neck. The other deputy was tased in the hand. Deegan continued to fight deputies as they loaded him into the squad car, so a drive-stun was used to subdue him. Deegan was transported by officers to a local hospital, where he allegedly admitted to using marijuana.

He’s been charged in Blue Earth County Court with felony counts of second-degree assault, disarming a peace officer, and threats of violence. Deegan is also charged with obstructing the legal process, fleeing a police officer, and domestic assault, all misdemeanors.