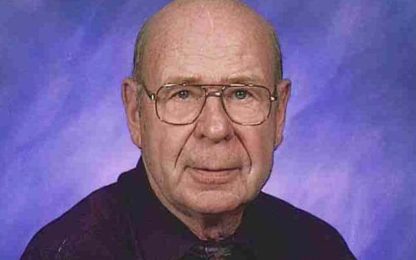 Service will be held at the United Methodist Church in Lamberton on Thursday at 1:00 pm.

The clergy will be Pastor Cathy Hoffbeck. Interment will be at the Lamberton, MN

Allan Dale Wetenkamp was born on August 14, 1932, son of Walter and Ruth (Thram) Wetenkamp in Fox Lake Township, Martin County, MN. Al was baptized at Trinity Lutheran Church in Welcome. His family moved to Lamberton in 1935. He worked at Miesen’s Super Valu and for his dad doing carpentry. Following graduation from Lamberton High School in 1951, he worked for a year and then enlisted in the Army Security Agency on January 2, 1953. Al attended training in Fort Devens, MA and was transferred to Seattle, WA and then to Alaska. He finished his time in the Army at Vint Hill Farms near Warrenton, VA. Al then attended Mankato State College and majored in History and English graduating in 1958. He returned in Lamberton and worked at the grocery store until 1994 as a meat cutter. Al worked at Tauer’s Super Valu until retiring in 2006. He had a passion for sports, especially baseball. Al managed the Lamberton American Legion baseball team form 1960-2001 and coached them from 1965-1974. He loved watching the Minnesota Twins and was a Minnesota Vikings season ticket holder for many years. Al covered high school sports for the Lamberton area for the Lamberton News and kept statistics for many sports for Red Rock Central since 1958. He received various awards for his dedication to the school athletic department and was given the Minnesota Athletic Director Association Award for Distinguished Service in 2002. Al enjoyed vacationing and traveled to 49 states and Mexico and Canada, having coffee at the gas station, and being with friends and family. He was a member of the Lamberton Methodist Church and Lamberton American Legion Post 41.

He is survived by cousins and many friends. Al was preceded in death by his parents, brother Wallace in infancy, and cousin Gary Rahm.